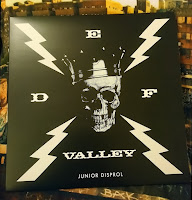 I’ve been looking forward to this one for some time. In fact I was asked to review this debut album some time before its release by the Dead Resident and ex Fleapit Emcee himself, something that is always an honour in my book.

This is not going to be your bulk standard, run of the mill Hip Hop or Rap album. Anyone who knows the afore mentioned material by Dead Residents and Fleapit will know and if you’re not aware, then you’re in for something outside the Hip Hop box but, still inherently Hip Hop at the core.
So, before I start waffling on, let’s just hit the ground running and get into the track by track lowdown on Def Valley:

The album kicks off with Who’s The Man. A classic titled usually set aside for emcee’s to brag about how badass they are but, here Junior Disprol flips the script by listing some of those names who have inspired him over the years, more famous names that you can shake a stick at. All that over a track that has an almost 80’s synth pop vibe to it, it all just works, masterful. Just as you are sinking into this vibe the album then catches you off guard and you’re hit with Chateaubriand. Described by Junior Disprol, and I can’t say it any better, as a “Hip Hop Shitkicking Joint, Top Rocking, references. Fly Shit”. The lyrical flow is intense and flows over a beat that, and I’ll give you my original feelings here, sounds like they took all the leftover samples from the cutting room floor and spliced them together to make a jazzy influenced vibe from something most might have given up on, just inspired and features cuts from DJ Jaffa. Switch from that to a bass so heavy, you’d think it was made from lead, and you get hit with Bananas. This one gives us Junior Disprol dropping “Twisted rhyme schemes for the sake of it” and who are we to argue with that. The track again features DJ Jaffa on the cuts.

Junior Disprol hails from the Def Valley in his home country of Wales and the next track is dedicated to that area. Def Valley is simply “The story of a provincial Hip Hop head growing up in the Def Valley of South Wales”. Continuing to take us musically to new levels, this track mixes elements of an orchestral soundtrack style feel, with a Jazz vibe. There is no let up on this album as Elohim Team explodes like hits from a sonic weapon, with Junior Disprol providing a lyrical ride that has a battle rap or almost gangsta rap style, hard in ya face and unrelenting and featuring savage cuts from DJ Killer Tom. As we hit the halfway point of the album, and perhaps your ears are feeling fit to burst then Its Awwwn. Your about to be hit by track loosely based around “my teenage years in Hip Hop”, with more chilled beat mixed with a funky horn, this one is about to slap the taste out ya mouth.

The second half of the album does not ease you in by any stretch of the imagination, with its freakish organ sample; The Rapture is still heavy even though it feels more laid back. If you were ever wondering what the world could be like in a post apocalyptic existence then welcome to the rapture Junior Disprol style, your time is up toys. Continuing to keep you on your toes, musically, Big Toe drops with an Electro Punk style vibe. “Big toes kicking” Junior Disprol just has the right voice, heavy and gritty, for this track. Stripping the things back to a more simplistic vibe musically, Black Summer still hits no less complex in its lyrical content with “some avant garde word shit”.

Taking us to a more soulful vibe on this track, Single Malt is one on reminiscing tip as Junior Disprol takes on a “True story about one that got away”. The albums penultimate track is Rum Shots and has that kind of Hendrix vibe about it and sees us taken on a ride with Junior Disprol on a “Train of thought philosophising ramble”. Into the final track of the album and there is nothing like going out on Chilled out vibe to bring you back to reality and Zen W.A. does that perfectly with a funky dope vibe and Junior Disprol dropping the kind of knowledge that comes with experience as he says “this is my older grown rapper self talking to the young, hungry M.C. I was and the balance between super ego and ID”. What a way to go out... 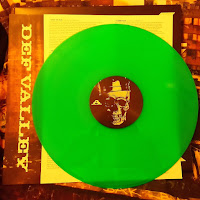 The first listen you give this album might make you wonder if you are really listening to a Hip Hop album, because it will take you to places you might not have been or even thought of going! But, make no mistake about it, that is exactly what this is. Hip Hop is about taking the music you enjoy, no matter the genre, and creating your own sound and that is exactly what Junior Disprol has done on this superb debut. The more you take this album in, the more you will get a feeling for what has been created and the more you will simply enjoy it.

This album might seem ahead of its years to some and to others it will be doing just what Emcees and producers have been doing for years. This is experimental Hip Hop of the highest order but, still relevant and banging regardless of where you play it.

This album brings a multitude of influences, experiences and desires together as one in a melting pot of ideas and then delivers a crafted and polished product that you will enjoy in a timeless fashion. Not just that but, way this has been crafted will inspire so many to go out there and craft their own works of art. This is not just a Hip Hop album, this is a benchmark, a bar setter and a reference point. If you have ever thought about making your own music, and I have for thirty plus years, then you must have this album in your collection as it shows exactly what can be accomplished when you have the heart and desire to just go out there and do it.

For an album these days to have no guests on it, this album easily stands shoulder to shoulder with the best of them. Junior Disprol proves that he is a force to be reckoned with in a crew or solo. Production wise CHUD Jackson has done an amazing job here. This is not a rollercoaster of an album that takes you up and down from track to track, Def Valley just drops vibe after vibe on your senses and leaves you to process it all at the end. No album would be complete without the artwork and here that comes from Junior Disprol himself and Scott Free. All released through the PLAGUE label, which is another you need to watch for future releases from.

Buy the album on Bandcamp HERE